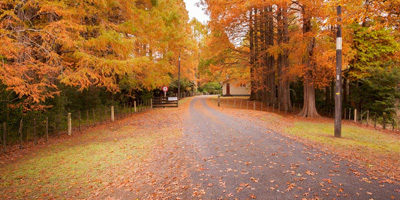 Te Wera Valley Lodge, situated 37 kilometres from Stratford on the Forgotten World Highway 43 and borders on the Te Wera Forest, a half hours drive from Stratford. Te Wera Forest has a number of sites of Maori occupation, there are at least six pa sites and many oven and flaking sites.

Te Wera known as ‘the burnt place’, oozes history of both the Māori and the European people. The sites near Te Wera fall within the boundary of the Ngati Maru iwi. The settlement in inland Taranaki was important for the collection of raw material by the coastal iwi of Taranaki, especially for the quarrying of abundant shingle deposits used in the making of the toki (adze), a māori stone tool. The importance of this area as a stone resource declined with the introduction of the steel axe.

European settlers came in the 1880’s but it was not until early 1910 that the railway line came to Te Wera giving settlers access to Stratford and then in 1914 the line was completed to Whangamomona. The 40 miles from Stratford to Whangamomona having taken 13 years to complete.

In 1953 Te Wera State Forest then owned by NZ Forestry Corporation (Timberlands), was established with plantings of Pinus radiata, with the aim of supplying timber to the Taranaki region. A single men’s camp was built to provide accommodation for the forestry workers. By 1980 there was no longer a need for accommodation for these men, due to the forest being fully planted and the improved roads allowing workers to travel. The Camp was closed. Eventually the Department of Conservation became guardians of this camp site.

It was then that a group of local people along with other clubs and organisations got together and decided to lease the facility to benefit the youth of Taranaki. As a result of this, in 1981 the Te Wera Outdoor Recreational Trust, a non-profit organisation was formed.

Today this voluntary group of people including some of the original group still continue to operate the facility and provide the opportunity for the educational, recreational, family and social groups to experience nature, outdoor activities and team building in a peaceful and tranquil surroundings.